The Promenade Girls' Choir was the first of the Promenade Choirs. It is a workshop choir - preparing concerts after short but intensive rehearsal periods during school holidays - especially at Christmas. Membership is by invitation and as such it is the only one of the Promenade Choirs that is selective. The repertoire ranges from A Ceremony of Carols by Benjamin Britten to Jazz standards such as Autumn Leaves.

The very first workshops were held in December 2002, and many of the members of the early workshops have remained regular supporters of Promenade events. The earliest concerts were small events with younger girls, but as they grew in experience they became capable of some very high quality music making. 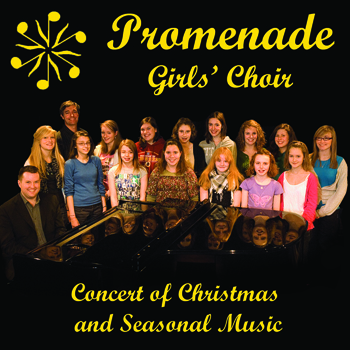 The cover of the Promenade Girls' Choir
Christmas CD

From the start, performances were often done at the Princess Alice Hospice. Charitable events were always important, and the girls loved singing to the patients. Eventually they recorded a lovely concert of Christmas music, and the CD was sold as a fund raising venture. The choir also performed for many years at the West End Village fair in the summer too.